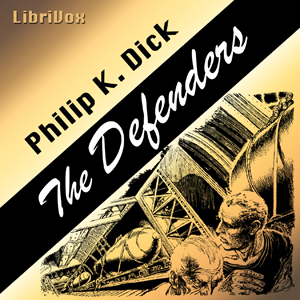 LibriVox recording of THE DEFENDERS, by Philip K. Dick.
Read by Phil Chenevert.

The terrible destruction of total nuclear war between the Western and Eastern Blocks has succeeded in sterilizing the surface of the earth. No living creature can now exist there and all humans on both sides, have fled to the hives built miles below the surface where they constantly work to produce the war materials necessary to carry on the battle. For 8 years now, the actual fighting between these super powers has been conducted by robots known as Leadeys since only they can sustain the terrible levels of radiation caused by the constant bombardment. They are the Defenders, standing between the combatants far below and ultimate victory or defeat. Life is hard in the tunnels, but liveable, while it is lethal on the surface. The leadeys keep the generals informed on everything through vids and pictures; but how can this continue? what will happen? Who will win? (Summary by Phil Chenevert)